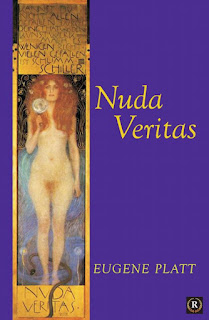 Eugene Platt, an octogenarian, was born in the Lowcountry of South Carolina, a region that tends to engender in writers a strong sense of place and which continues to inform much of his work. After serving in the Army (11th Airborne and 24th Infantry Divisions, 1957-1960), he earned a BA in political science at the University of South Carolina, an MA in English (with creative thesis) at Clarion University of Pennsylvania, and a  Diploma in Anglo-Irish Literature at Trinity College Dublin. As a young poet, he was active on the reading circuit, giving over 100 public readings of his work at colleges, universities, and libraries across the nation. Nuda Veritas has been published by Revival Press (Limerick Writers Centre) and is available on the publisher's website. He lives in Charleston with his main muses: Montreal-born wife Judith, corgi Henry, and cat Keats. (Poets and Writers Directory).

Nuda Veritas is an attrctive collection. In the preface Platt explains the choice of Klimt's painting for the cover. In the painting Eve holds an outward facing hand mirror urging the onlooker to consider the naked truth about themselves rather than ogling her naked body. As a young man the poet studied at Trinity College (1969 - 1970) and while there he found appreciation for the works of Patrick Kavanagh. Kavanagh had written that "only in verse can one confess with dignity" (Self Portrait). Platt concludes that it is only through his poetry that he can convey his own truth.

The collection opens with Folly Beach Hotdogs which is a lament for "Youth's gone now", and a seeking of something to satisfy the soul by the ocean, a place between the "fragile Edge of America" and "fabled America". Something of the exoticness of South Carolina and its neighbouring "Atlantic Coast Line" states, is described in Listen, Melontime, Ashley and Main Crops, South Carolina. I've never wanted strawberry shortbread more than now after reading Eat Strawberries and Seize the Day, "...on Summer Sundays...my salvation...was coming home...to feast on fried chicken...and my mother's renowned strawberry shortcake". Platt describes with sensitivity and honesty the death of his father in a series of poems, acknowledging "the fortune of having been his son" in Pennies from Heaven.

Towards the end of the book the poet explores a love of Ireland. In Destination Dublin he is excited to be travelling "Eastward eastward..." and in At Trinity College he recalls "dreaming of Deirdres, Maeves,/and a Nuala I may never know" while realising he should have been "in the library reading the works of Kavanagh, Kennelly,". Platt visits the grave of Kavanagh in After Inniskeen and he explores Irish history in Great Britain (quoting Sean O'Casey's "...the fools, the fools, the fools! - They have left us our Fenian dead...") and in Waiting for the Train at Ballybrophy Junction.  These poems demonstrate Platt's awareness of Irish cultural motivations being rooted in the tragedy of the Great Famine and the painful quest for independence.

Nuda Veritas is an ample read and it is peppered with many fine poems offering insight into man as son, student, poet, soldier, father, husband and citizen of the United States striving to "come home to the spirit/ which soars within me" (The Eagle Within). One piece that stands out is Musing at the Music Barn which the late Eavan Boland published in Poetry Ireland Review. In this Platt describes his attendance at a concert where a band (I'm assuming The Beatles) played. The poet vows to write some fan mail to the musicians and he uses John Donne's line, "more than kisses, letters mingle souls" to conclude the work. This is just one example of the erudition and attention to detail Eugene displays throughout the collection.

Nuda Veritas is a big, bold, beautiful book full of heart. It is weighty with quality and information. The title poem is perhaps the magnum opus if Eve is the self we would, or should become, if Eve is the higher self, the self love we ought to give ourselves, or a spiritual attainment our souls long for in considering

...the naked truth about myself,

the prototypical Adam inside each of us,

we know we can never disown.