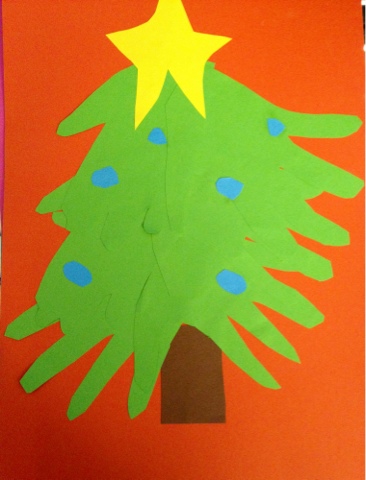 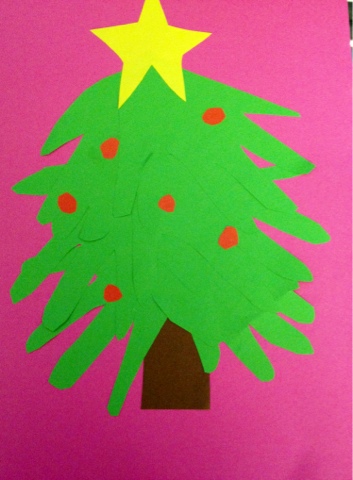 I am silver and exact. I have no preconceptions.
What ever you see I swallow immediately
Just as it is, unmisted by love or dislike.
I am not cruel, only truthful---
The eye of a little god, four-cornered.
Most of the time I meditate on the opposite wall.
It is pink, with speckles. I have looked at it so long
I think it is a part of my heart. But it flickers.
Faces and darkness separate us over and over.
Now I am a lake. A woman bends over me,
Searching my reaches for what she really is.
Then she turns to those liars, the candles or the moon.
I see her back, and reflect it faithfully.
She rewards me with tears and an agitation of hands.
I am important to her. She comes and goes.
Each morning it is her face that replaces the darkness.
In me she has drowned a young girl, and in me an old woman
Rises toward her day after day, like a terrible fish.

Sylvia Plath
Posted by Orla Fay at 22:11 No comments: 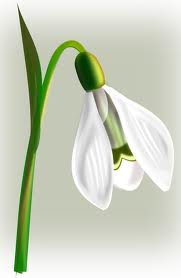 Get your work ready in the immediate for submission to Ropes (Review of postgraduate english studies at NUIG).  The theme this year is Links.  I had a short prose piece published in the 2010 issue.  Details to be found at http://ropesgalway2012.wordpress.com/ and email submission to ropes.submissions@gmail.com by the 9th of December.

Crannog are also looking for submissions.   I have had poems in Crannog 20, 23 and 26.  They seem to like my spring poems and I love Crannog and Galway.  These are both great Galway publications.  Submission period for Crannog ends 01st January I think.  http://www.crannogmagazine.com/submissions.htm
Posted by Orla Fay at 20:53 No comments: 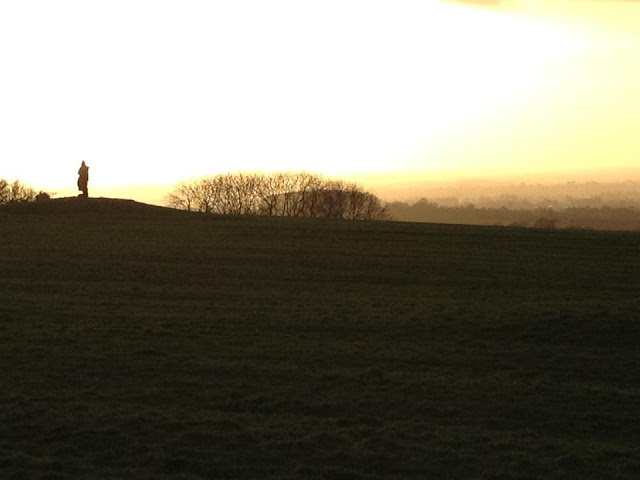 Druid on Tara via iphone - magic!
It's been a weekend of total distraction so no writing has been done though I do have an idea for a new poem.  I'll say no more.
Posted by Orla Fay at 18:52 No comments:

A Work in Progress... 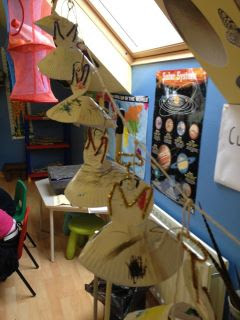 They just don't make them like this anymore!  The 80's were a creative period, musically especially it seems to me.  Music shapes us.  It's all going on in this video.  Hold me is from the album Mirage, hence the desert setting and mirrors I suppose.  And what genre of art is being evoked, surrealism?  What painters, ﻿Rene Magritte, Dali.  There is a girl with a white horse and the sand dunes make me think of Star Wars, doesn't Stevie Nicks look just a little bit like Carrie Fisher (Princess Leia)?  How did Fleetwood Mac write such amazing songs.  Was it chemistry?
Did you know that the video for Everywhere is based on the poem The Highwayman by Alfred Noyes:
THE wind was a torrent of darkness among the gusty trees,
The moon was a ghostly galleon tossed upon cloudy seas,
The road was a ribbon of moonlight over the purple moor,
And the highwayman came riding—
Riding—riding—
The highwayman came riding, up to the old inn-door. 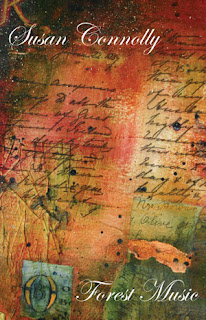 This coming Friday at 1 pm you can catch Susan Connolly in The Irish Writers' Centre where she will read poetry.  The event is in association with Poetry Ireland.  I won't make it but if you can be there then you will be in for a treat as Susan is a wonderful writer.  I think she is one of my favourite Irish poets.  She read at The Boyne Readings in Trim (which incidentally I kind of miss, hopefully they will return in the new year) and she has a poem published in Boyne Berries 10.  Susan has many lovely poems about life, relationships, ancient Ireland, her native places and the beauty of the countryside.  Yes I am a fan!! Go and buy one of her collections ( For the Stranger, Winterlight, Forest Music) for yourself and you'll see what I mean.
These are busy times in the literary world.  In fact I have just been thinking that I haven't taken my foot from the floor all year in regards to writing.  This week Kate Dempsey will read Some Poems from The Moth editions in Maynooth Contemporary Arts Centre at 7.30 pm.  On Thursday night there is an event in The Irish Writers' Centre celebrating  Frank X. Buckley.  I have been invited as I entered a competition to write some poems based on the paintings in the Irish Writers' Centre.  It looks like it will be a fabulous event.  I don't know if I will be able to attend Kate's reading or the latter as I am in work all this week until 6 o'clock.  The winners of the Frank X. Buckley Competition are Elizabeth O'Carroll, Paddy Doherty, Susan Stairs, Eleanor Hooker, Eoin Hegarty and Patricia Clark.
Posted by Orla Fay at 22:29 3 comments: 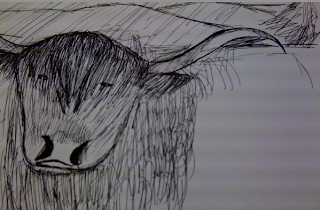 
When the black herds of the rain were grazing,
In the gap of the pure cold wind
And the watery hazes of the hazel
Brought her into my mind,
I thought of the last honey by the water
That no hive can find.
Brightness was drenching through the branches
When she wandered again,
Turning sliver out of dark grasses
Where the skylark had lain,
And her voice coming softly over the meadow
Was the mist becoming rain.

Austin Clarke
Posted by Orla Fay at 20:41 No comments: 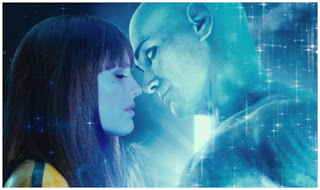 Silk Spectre and Dr. Manhattan
So the movie Watchmen has left a big impression on me.  I loved the character Dr. Manhattan as he is cerebral.  He goes to live on Mars and he's blue and shimmers!!!  The character Rorschach is intriguing too.  Silk Spectre is the daughter of Sally Jupiter, the original Silk Spectre.
Speaking of Jupiter - Tori Amos performed Hey Jupiter from Boys for Pele﻿ in The Grand Canal Theatre on Wednesday night.  I was lucky enough to be there.  Tori wore green and performed from her current album Night of Hunters which is a concept album that Amos has described as "a 21st century song cycle inspired by classical music themes spanning over 400 years."
Tori Amos - Night of Hunters 2011 Tour
Dublin, Ireland 09-11-11 SETLIST

A MULTITUDE OF SHADES
YOUR GHOST 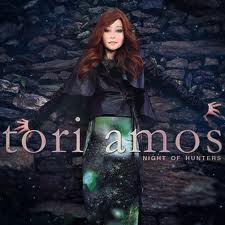 Six of us attended the meeting on Thursday last.  Maria Durnin had some prose about a singing competition she has competed in, Rory O'Sullivan a balladesque poem about the dark and fear, what hides in that, Eamon Cooke a poem he had revised since the last meeting about the sea and balance, Barbara Flood some thoughts about opposites, especially the light and dark, and I brought a poem called Sweep, which on one level is about cleaning out a stove fire.  It would be fair to say that we were all influenced by the season.  Ann Crinion told us about her new book of photography which will be launched in early December.
Eamon Cooke told us about his poetry collection Berry Time which was published by Dedalus Press in 2002.  I had an interesting conversation with Rory about super heroes and he told me about the beauty of graveyards.  One he spoke about somewhere between Trim and Navan sounded like an enchanted garden.
I was working on two pieces during the week.  They're done now so I will be looking for something else to write about.  There is a multitude of competitions to enter at the moment; The Trocaire Poetry Ireland Competiton, The National Poetry Competition with Windows Publications and Cavan Crystal, The Gregory O'Donoghue International Competiton and The Ballymaloe International Competition to name a big four.  Most will look for poems of 40 lines or less and have deadlines in December so there is still time to write and submit.
Posted by Orla Fay at 10:09 No comments: 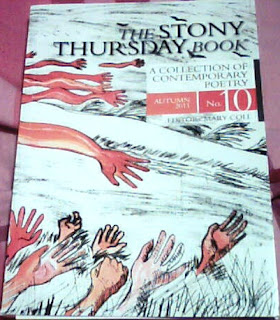 Yes finally I got home from work and it was here, arrived in the post today.  Included was a lovely little note from the Arts Office of Limerick City Council, from Kathleen O'Connor who says that this will be her last Stony Thursday Book as she is retiring on 09/11/2011.  I'm only sorry I couldn't make it to the launch of the book.
My poem is on page 17.  There are lots of great writers included; Peter Goulding, Brian Kirk, Tommy Murray, Kerrie O'Brien, Geraldine Mitchell, Eileen Sheehan, Shirley McClure, James Lawless, Kevin Graham, Mary O'Gorman, the list goes on... There are 70 pages in all.  The editor is Mary Coll.  The cover art is Inspiration is Pervasive, a hand printed lithograph by Pauline Goggin Wrixon. 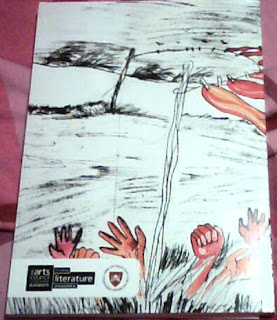