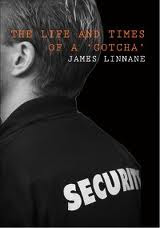 I attended an enjoyable readings with members of The Boyne Writers, Meath Writers Circle and The Meath Cavan Litlab on Thursday night just past.  The featured reader was James Linnane who has recently published his novel The Life and Times of a Gotcha.  A "gotcha" is Dublin slang for a security guard.  James also writes poetry.  To find out more about the author please follow this link :
http://www.theauthorsfriend.com/catalogue/titles/the_life_and_times_of_a_gotcha_james_linnane.html
Readers in the open mic included the wealth of Frank Murphy, Michael Sheils, Michael Farry, Honor Duff, Maria Durnin, Barbara Flood, Jenny Andersson and Anne Crinion.  Paddy Smith did a wonderful job as mc.  Pictured below, myself.  I would have more photos but my camera to pc connection seems to be playing up at the moment.  The next Boyne Readings will feature The Poetry Divas. 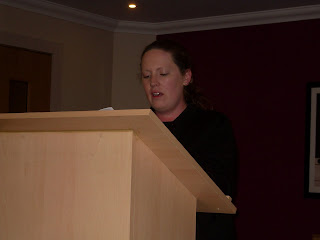 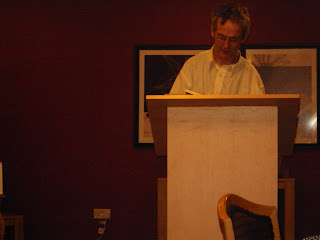 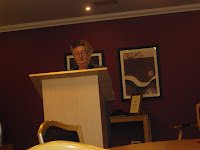 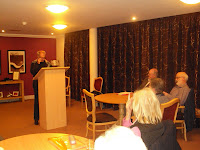 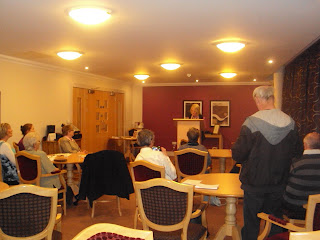 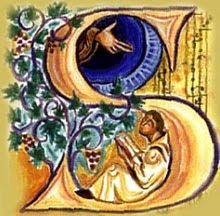 I've just finished watching an intriguing programme on RTE1 about treasures from our bogs.  In light of my recent exploration of early Christian places in Louth and Meath this comes as hugely interesting.  A Psalter is a book of psalms.  Wow so this Psalter had papyrus on its cover which has been unheard of in Ireland.  And perhaps we owe more to the Coptic church in the Middle East than we do to Roman Catholicism.  The book resembles the style of books produced in the Coptic way.   The Coptic Church was founded by Saint Mark in Egypt in the first century.  He was one of the four evangelists.  The experts are dating the book to roughly 800 a.d.
The Psalter is going to go on exhibiton in the National Museum this Summer.  It was found in a bog in North Tipperary and it looked like a pile of sludge when found though clearly resembled a book with a leather cover too.
http://www.museum.ie/en/news/press-releases.aspx?article=8cbaffc1-d2c5-42d1-a042-46a367bb214f
Posted by Orla Fay at 00:36 4 comments: 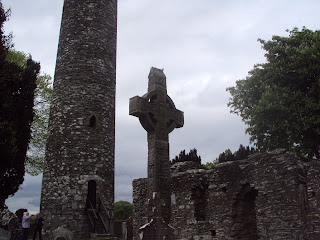 And today I visited Monasterboice, Mellifont Abbey and The Hill of Slane.  They are all on the same loop.  I've found myself building a mental picture of the landscape of old Ireland and I've lots of material to take from to write.  As I saw in a friend's book about screen writing "The hardest thing about being a writer is knowing what to write." I hope some day I can come up with a plot for a novel, maybe I need to do a workshop or read some books, or actually apply myself to the task.  For now, back to poetry
To revisit the three sites in chronological order, ok..  What I found interesting about The Hill of Slane is that St. Patrick converted King Laoghaire's druid to Christianity and he became the first Bishop of Slane.  Patrick must have been a very charismatic man and this is what Christianity did, it incorporated paganism into itself. 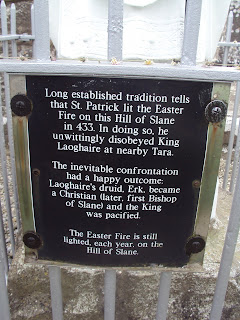 Monasterboice is striking for its three high crosses and round tower.  These round towers were built so that people could take refuge in them from the Norsemen.  The entrance to the tower was high off the ground with a retractable ladder. 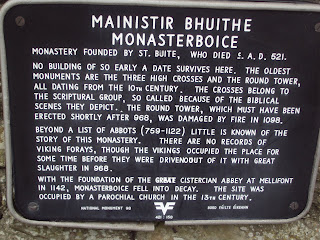 Mellifont functioned well from c.1160 until the c.1560 when Henry VIII had it dissolved.  It was a Cistercian Abbey and its monks were trained in Clairvaux in France.  Saint Malachy introduced the order to Ireland.  There seems to be a lot of work going on in Mellifont at the moment.  They must be preserving and restoring the ruins.  ﻿
Just outside Navan on the Slane road there is another round tower at Donaghmore and St. Patrick is said to have founded a monastery here.  Did you know that?  I didn't but I've always found it a curious site but never thought to question its origin.
﻿
Posted by Orla Fay at 22:20 2 comments:

The Children of Lir 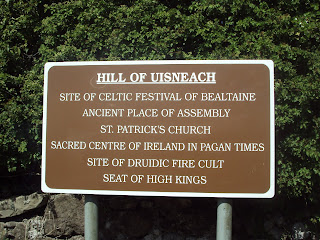 I went in search of the Hill of Uisneach today and I found it only to be disappointed.  It's on private property so I couldn't see much.  That was a shame.  Uisneach is located outside Mullingar, 3 km from the village of Loughanavally  There is a festival of fire there next weekend.  The Bealtaine fire was lit here it is said.  Tara lit their fires when they saw Uisneach's.  In Irish mythology it was the omphalos, the mystical navel of Ireland.
So what then, well I went to Lough Ennell which is a stones throw away where I found a beautiful swan.  It made me think of researching The Children of Lir. 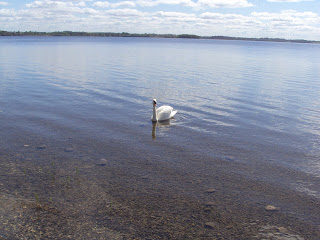 ﻿Lir's wife Aoife turned the children; Aodh, Fionnuala, Conn and Fiachra into swans out of jealousy.  She was their stepmother.  The children were sentenced to 300 years on Lough Derravaragh, 300 years upon the Straits of Moyle and 300 years on the isle of Inish Glora.  Only when the children heard the bell of the new God (Christianity) would they be free of the spell.  When the children died they were the last of the Tuatha de Danann.  This fills me with immense sadness.  Lir, their father, was Lord of the sea. 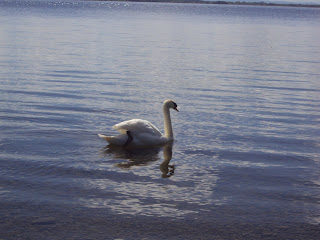 I'm so excited because I just entered this competition online and I've never entered this competition before.  The maximum length for a poem is 42 lines excluding title and it costs 6 pound sterling for one entry of a single poem, roughly 6 euro 70 cents.  Poems must be single spaced.  The poem I entered was written last Winter and it's been revised many times, but I bet it still needs work!  The deadline for entries is the 30th June.  The judge for the Bridport poetry section is the famous Carol Ann Duffy.  I have her collection Rapture which I enjoyed:
Falling in love
is glamorous hell; the crouched, parched heart
like a tiger ready to kill; a flame's fierce licks under the skin.
Into my life, larger than life, beautiful, you strolled in.
from You, Carol Ann Duffy
I've spent hours today working on my poetry and I've been so happy doing it.  Some would say that I need to get a life or join a support group.  I did stop to eat, take exercise and drink coffee.
http://www.bridportprize.org.uk/
Posted by Orla Fay at 20:36 3 comments:

I haven't been to my blog in what seems like ages.  Time is funny like that as I think of phrases like "what a difference a day makes" and "a lot of water has flowed under the bridge."  Well time does fly that is for sure.  Have you seen the aer lingus advert on tv?  They are 75 years old.  "Doesn't time fly?" or something like that is the catchphrase on the advert. 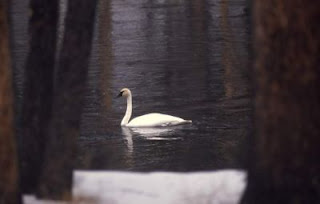 So in the meanwhile, is this the right word to use? In the meantime? I have written three poems that I am happy about.  One is about Glendalough, another about my grandfather and a primrose and the other is about a friend I used to have and a park here in Meath.  Another one I am going to look at now - which is about the classroom where I work - isn't quite finished.  I haven't enough ink in my printer to print them which is so annoying :(
I feel like I have lot of images collected in my mind which I need to explore.  I also got an email from Elizabeth Reapy who is the editor of Wordlegs, an online magazine/e-journal/e-zine? and I am going to have my poem "Empire of the Sun" in the Summer issue which will be released in early May.  I'm happy about that.  Thanks.
http://www.youtube.com/watch?v=t-idDbIfGvw
Posted by Orla Fay at 22:34 3 comments: 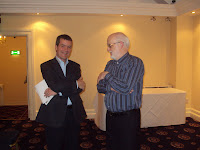 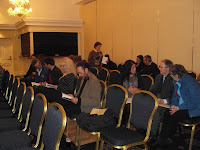 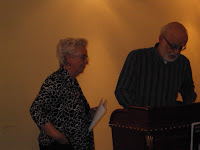 At the launch of Boyne Berries 9 are pictured above left Noel Dempsey and Michael Farry.  The image of the crowd shows C.P. Stewart, Antoinette Rock and Evan Costigan to the fore.  To the immediate left are Anne Crinion and Michael Farry.  Below left is  is a snap shot of Boyne Berries cover artwork through the past issues as designed by Greg Hastings.  Group member Rory O'Sullivan is to the right.  His poem Graveland appears in this issue.  And finally we find Barbara Flood, group treasurer.   Submissions for the next two issues of the magazine will be open from 1 May to 31 July 2011.  It was an exciting night. 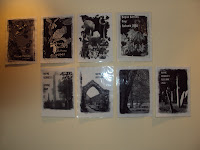 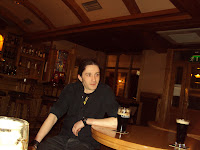 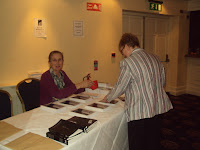