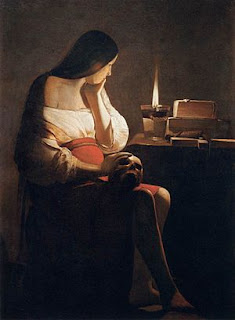 What must it have been like for her,
sweet sixteen, betrothed by her father
to the King of Ulster?

Wanting a different life, a rebel,
she prayed that her beauty
be taken away.

When ordained God gave
Brigid back the eye he had taken
in her veiling.

Her path was of milk and flowers
and the purity of her soul
was a great gift the Christians said,

but pagans recognised her witchery,
the magic of the miracles
and the splendid power of tales.

Her light lit the chambers of Tara.
Divinity was Imbolg, in the belly,
Spring’s flint, Candlemas,

I will co-judge Trim Poetry Competition again this February. Last year the Boyne Writers Group secretary gave me around 220 poems which I read carefully. All poems were anonymous. As I read I placed work I considered of special merit in a separate pile knowing that I would have to whittle the stack down to 30.

The second part of the process was done with fellow adjudicator Michael Farry. We had chosen very different poems but we did have some choices in common. We discussed these preferences and after some time came up with a shortlist of 10. In the end a couple of poems were in the running for overall winner. This year we will have two runners-up.

Things that attract me to a poem are a fitting and clever title, correct spelling and grammar, a well crafted poem, formal poetry, lyrical poetry and free verse, poems with emotion, unexpected poems, poems that try to say something different, poems that ache, poems that bleed, poems that try to heal, the voice of the poet, striking use of language, humble language and above all, imagery.

To enter there is a fee of €5 per poem or €10 for 3 poems. Entries are by email to trimpoetry@gmail.com

Further details on how to enter can be found here.

The Persistence of Time 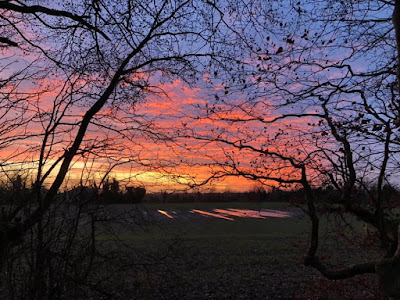 Happy New Year to all reading. I hope that 2020 will bring you health and happiness. I've written a poem today to mark the end of an often difficult decade. When I went for a walk earlier I saw a lady in a red coat in the distance and that was the seed of the poem. A quick thank you to Dodging the Rain, The Pickled Body and Atrium Poetry who recently published my work.


The Persistence of Time

I wonder if she is more a future figure than a past,
this lady of the year, in a red coat festive stepping
around the corner that stretches to a decade-long length of road?

I do remember when the 80s became the 90s,
all that revolution, and when the 90s turned millennium.
2009 was an ice-cube in the Harvey Wallbanger of the 2010s.

This late afternoon could be an abstract of time,
its dreary sky combined with misting rain makes tree-clocks.
Dull, surreal faces spin about bare branch tops.

The big hand spire of the church takes me back
to Christmas morning, the sleepy mass, hymns
dreamlike, the intoxication of cloying incense.

Now I have the present and a different communion,
those walking whose spirits flicker like candle flames
in the oppressiveness of the day with chants of greeting

“A Happy New Year to you!”
The religiosity of life lays itself down for my attention,
a path both worn and unworn unknown.

Salvador Dali, musing, strokes his giant moustache before me.
When she is out of sight it is troubling to consider
that the past is the future in a rear-view mirror.

Labels: The Persistence of Time

A Poem for November 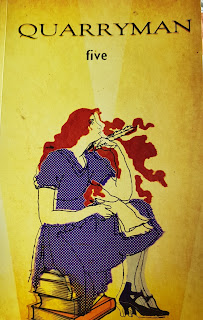 My poem November Roots appeared in Quarryman Five published April past. The literary journal of UCC is currently looking for submissions to issue Six. 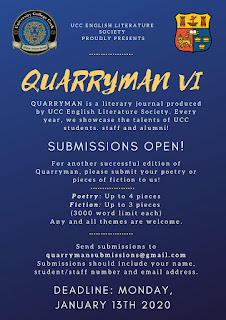 November Roots had its origin in that Edna O'Brien quote "In a way winter is the real spring, the time when the inner things happen, the resurge of nature." When November arrives I also always think of Frost's My November Guest, "My sorrow, when she's here with me/ Thinks these dark days of autumn rain/Are beautiful as days can be..."

This is also a poem for anyone out stargazing.

Leaving the town, the church bell grown
to a dull clang wrings out eleven o’clock.
Into mid-November I am walking,
a countryside grown sparse,
though in fact it is dying
and I wonder at what point
is the scales tipped
from one to the other?
How almost vernal the day
becomes in the height of the afternoon
sun stretching its greatest yawn
before setting, the night a shadow
gracing the day time land,
the white and pale blue sky,
marking the bare branches, so smooth
stripped outrageously for the buds of new year.

A silence has fallen on the woods,
the hunter’s gunshot resounds,
the pheasant is startled, the dog unsure.
The moon appears, a fat thumb print
and the stars a trail of breadcrumbs
to the deepest night, an all covering
canopy of midnight pricked with silver.
What if the whole of space
is a river of time and the stars
the sunlight bouncing off its ripples
and currents, dark water, deep space?
I feel closest then to my ancestors,
minutiae of the universe,
hypnotised, rooted to the spot, eyes gazing
upwards, entranced by the heavens
but a thing of gravity. My mantra:

Delighted to have a poem Highly Commended here. Well done to all on the list. 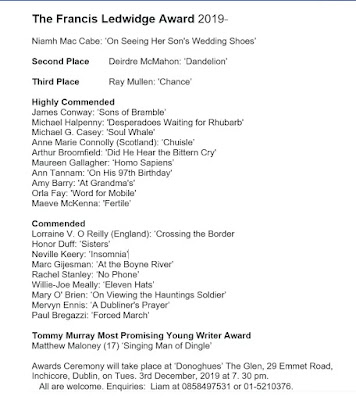 The Burial of Alice de Fir

The Burial of Alice de Fir published again in Meath Writers' Circle 5th Annual Magazine, an old poem that's a fave for some. 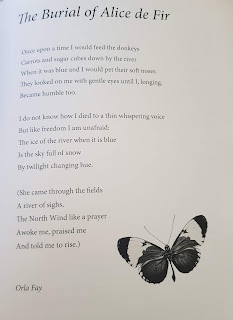 It was a very enjoyable evening in Trim Castle Hotel for this launch yesterday. I captured some video footage and took a couple of photos. Congratulations to Frank Murphy, editor, and to Willie Hodgins who acted as compere for the event. 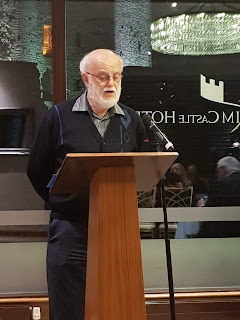 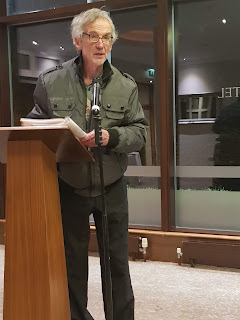 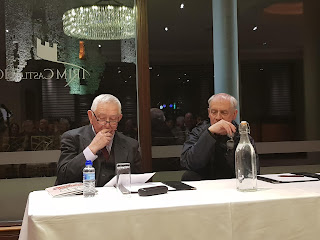