A Review of my Creative Writing Year, 2018 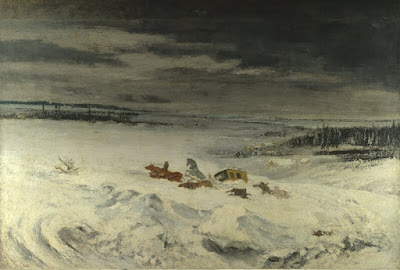 The Diligence in the Snow, Gustave Courbet 1860

With the clarity of a walk behind me and a freshly cleaned window to let the light in, with the sun setting on what has been a mild, mostly sun-filled day and with some tea tree and lavender oil burning I'm writing a review of my successes with poetry this year.

It was with a stormy beginning to 2018 that Missing Hours was published in Honest Ulsterman. It was a poem I loved writing which led me to research old Irish mythology. It was created alongside Poet in a Train Station Bar, and a third poem which eludes me presently. Poet in a Train Station Bar was a very successful piece which both Eavan Boland and Ciaran Carty liked. It appeared online in The Irish Times and in print in Poetry Ireland Review 126. There is a story behind this poem but I'll keep it to myself.

Crannóg included the poem Better Love in issue 48. I've been lucky enough to have work in this great magazine a few times over the years. Better Love  was inspired by Hozier's powerful song. In the Easter issue of The Bangor Literary Journal Spring's Bride leant its name to the title of that special issue which was an honour. Spring's Bride was a love letter to the cherry blossom tree and an older poem which I was truly delighted to see published.

Caught in a Dance, a poem about swallows gliding over the Porchfield in Trim found its way into issue 10 of Skylight 47 in May, just in time for their return after the long winter.

A huge part of the year was the completion of the MA in Digital Arts and Humanities at UCC. I wrote a thesis on poetry in the digital age and created a digital artefact. I must thank all the poets and writers who assisted me in the research and I'm delighted to display the link to the artefact here and to say that I scored an overall 2.1 in the masters. I also had a poem published in Quarryman, issue iv, the literary journal of UCC. This poem was called The Etymology of the Word Love and it was an exploration of linguistics and how people perceive words and realities differently.

In later summer I was thrilled to be longlisted and subsequently shortlisted for poetry in The Over the Edge New Writer of the Year Competition. This shortlisted poem was about a train journey to Belfast. Blackberries was a villanelle that was highly commended in The Jonathan Swift Creative Writing Awards 2018. I wrote Blackerries a couple of years ago but I edited it again this year and simplified it a little and I think it worked better. It is, afterall, important to make a poem somewhat accessible. It was a well-crafted and well-conceived poem. Digital Shadow, which was shortlisted in The Red Line Book Festival Poetry Prize in 2017 was published in Red Lines, an anthology of winning poems from the last 5 years of the festival.

A highlight of the year was learning that I had a winning poem in Hennessy New Irish Writing in The Irish Times. This meant so much to me and in September Kiosk No. 6 found its home. It was written in 2017 after I read about Banksy and couldn't get the image of the telephone box out of my mind. It amused me that in early October this year Banksy pulled his latest stunt, a self-destructing painting, Girl with Balloon.

Poetry NI curated Changing Verses In Midstream for National Poetry Day. I was happy to contribute The Other Side of Eden to this project. This was a poem I didn't think would find a place in the world and has its origins in a very old poem from my star-gazing youth and in a sonnet which is its non-identical twin. My unrelated Sonnet in Appreciation of the Comma was published in Smithereens Literary Magazine #2.

In Tales from the Forest The Elixir of Youth  can be found, which is the amalgamation of two poems from 2017 that I had to work hard on to produce something finished. MacCabre appeared in the Samhain issue of Three Drops from a Cauldron. It was an older poem too that I had to rework a few times to get right. Finally in 2018 Portrait of Summer and Only, Or The Far Off Sea were published in issue 10 of North West Words Magazine. Both these poems were written in 2018.

I wrote a review of The Radio by Leontia Flynn in late October for Reading Ireland. This collection left a strong impression on me.

It just occurred to me that the third poem I had written (as mentioned above) was called The Holly Tree in the Village and The Meath Writers Circle printed it in their annual magazine in early November.

In the year to come I hope to write more poems, and to have more work published. I am working towards a first collection, gods and faith and fates and will be willing. I love having a creative and inner life and I hope I can honour and respect it throughout 2019.

I suppose a good way to start is to begin a new poem asap.