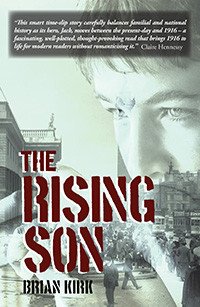 The Rising Son is a debut children's novel by Brian Kirk. It is at once a comfortable and familiar read, familiar in the sense that it describes Irish family life and culture. While doing this it also educates the unfamiliar eye about what it means to be Irish. Kirk approaches this neutrality through the 12-year-old protagonist Jack O'Connor who has grown up in London with an Irish mother but without much sense of the Irish culture, for example his lost extended family in Dublin, Dublin city itself, the pleasure of tea drinking, the history of Ireland and Gaelic football.

While on one level The Rising Son is something of an erudition on Irish socio-cultural heritage it also attempts to explore the socio-historical in bringing the 1916 Rising to life through the eyes of Jack and his friend Willie Mahon. They do say that the best way to learn about something is to experience it. Kirk employs a fantastical blanket (capable of time travel) that has been passed down through the generations to do this. Does this go far enough to be fantastic or should it go further? You will have to read the book yourself to discover this. It is a nice touch by the writer to remind us through a character, Robert Burke, that the word dream comes from the Saxon and German word traum and since Freud's theories has had close links with the word trauma. Has Jack been dreaming or has he really been to the past?

The Rising Son is an enjoyable, well thought out and well conceived book. I was surprised I enjoyed it as well as I did. It poses questions for the times we live in by allowing time and mindset to overlap. It is testament to the writer that this can be measured but Kirk himself is the descendant of a member of the RIC and of a quartermaster for Cumann na mBan in 1916.
Posted by Orla Fay at 17:56 No comments: 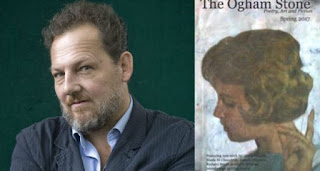 Giles Foden
The The Ogham Stone is the gift that keeps on giving this year. The excellent introduction to the journal by Giles Foden appeared in The Irish Times recently.  I was honoured to have a poem appear in the journal, Lau Tzu at the Door which I also recorded for Lagan Online's Poetry Day Ireland Mix Tape. Poet Glen Wilson also appears in The Ogham Stone and on the mix tape.
In relation to my poem Foden writes about how a channel for memory is created when things are given names. This is one of the powers of words and of writing, the power to sweep away the old and create the new in the naming.  This is the symbolic if you like.
In other news I was recently delighted to make the Longlist of 20 for The Anthony Cronin International Poetry Award 2017.﻿
﻿
Posted by Orla Fay at 17:35 No comments: