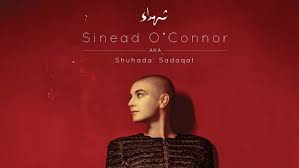 It was truly great to see Sinéad O'Connor return to The Late Late Show last night and sing to our heart's content A Rainy Night in Soho and Nothing Compares 2 U. It's a testament to Sinéad's talent that songwriters like Shane MacGowan and Prince trusted her with their beautiful songs.

She wore a strikingly red hijab and I was reminded of past appearances on the show when she had worn a priest's collar. Mostly though today I can hear Ms. O'Connor sing Mandinka and I recall the imagery of the lyrics of that video. She is

...dancing the seven veils
want you to pick up my scarf
see how the black moon fades
soon I can give you my heart


as a wispy crimson scarf fades into the 1980s. It was a world where MTV was new. I first heard her sing this song on Dave Fanning's show on 2fm and I recall his enthusiasm for her album, The Lion and the Cobra.

Afterwards I loved You Made Me The Thief of Your Heart from In the Name of the Father. The passion of it, the questions it asked and dared not ask at the same time. Where are we now in this Brexit era, where is our island, our lovely brothers and sister in the North? I'm still in awe of Haunted from the '90s.

I adore that Sinéad can talk about mourning her youth (she's 52) and that she can sit herself next to Sufism. I am long a fan of the mystic poet Rumi.

Let yourself be silently drawn by the strange pull of what you really love. It will not lead you astray.
- Rumi