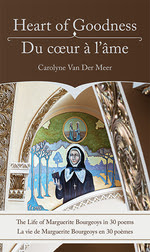 Carolyne Van Der Meer has worked in corporate communications and public relations for most of her career. She has been a journalist, a university lecturer, an independent scholar and an author. Her journalistic and creative work has been featured in magazines and journals internationally. She has three published books, Motherlode: A Mosaic of Dutch Wartime Experience (Wilfrid Laurier University Press, 2014), Journeywoman (Inanna, 2017) and Heart of Goodness: The Life of Marguerite Bourgeoys in 30 Poems | Du coeur à l’âme : La vie de Marguerite Bourgeoys en 30 poèmes (Guernica Editions, 2020). She is from Canada.
Coming to Van Der Meer's subject (Marguerite Bourgeoys) a complete novice (pardon the pun) it was a pleasant surprise to find the collection unputdownable. Each poem leads seamlessly to the next and a rich tapestry of the French nun's life is woven. The intricacies of Bourgeoys' steadfast faith, the challenges she faced as a missionary and the moments of doubt she experienced are all explored. The book is a wonderful channel to what life was like in the mid seventeenth century.
One is never disinterested or burdened in reading Heart of Goodness. While the poems explore the thinking of a woman who lived over four hundred years ago I found much to relate to in her struggles, which must be testament to the talent of Van Der Meer in bringing Bourgeoys' spirit to life. Not since learning of the trials of Sor Juana Ines de la Cruz have I been so captivated by the whys and wherefores of such a calling to serve.
Rejected by several orders but determined to honour Our Lady, Bourgeoys left France and founded the Congregation of Notre Dame of Montreal in the Colony of New France, now Quebec. She reached Fort Ville-Marie (Montreal) in 1653 where she educated young girls and the poor while developing the convent. She is the first female saint of Canada, having been canonized in 1982 by the Catholic Church.
Those Carmelites / didn't want me / I won't give up / my gift to God / my only mission / If it's not in the cloister / it'll be somewhere else / He'll take me / even if they won't (Poem #4)
Available from Guernica Editions Heart of Goodness is for anyone seeking a spiritual top up, or a quiet, yet enthralling read away from the headline busy world. It is of course for those interested in missionary life, the New World and History. The thirty poems appear in both English and French which is a great boon to students of language. Congratulation to Carolyne on a finely crafted and ecumenically valuable work.
Posted by Orla Fay at 16:28